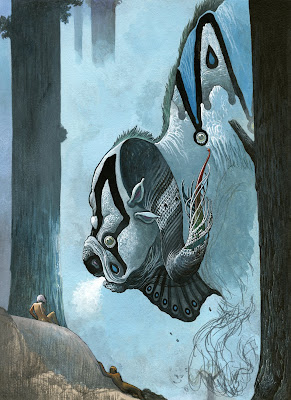 Posted by Shanth Enjeti at 2:52 PM No comments:

Why You Should "Murder your darlings"

"Murder your darlings," is a popular expression used in creative pursuits. Often translated to the less poetic, "Murder your babies," this expression is used by artists to express our need to be willing to throw out ideas or elements in our creative pursuits that we have grown attached to, because they do not serve a particular work's needs.

As many of you will recall, I painted an image for a personal project that I titled, "Seqouian Muircow."

It was an interesting image, that was competently rendered, but it never felt right conceptually. Worse still, was when I created the character called "The Shucking Squid," from the same story, and it became obvious how uninspired the ideas behind my first pass of "The Sequoian Muircow" were. For a while I tried making small changes to the image, in an attempt to not have to lose all the work I had put in to the painting. In the end, there was no acceptable partial fix, and I solved my problems with a sponge and a lot of blue paint.

Starting from scratch is difficult, but one of my former RISD instructors, Tony Janello (whom I am proud to now call a colleague), taught me over a decade ago how to properly search for an honest expression of yourself. I scribbled in marker and gouache until I started to see forms that spoke to me and I pulled them out of the fog.

The character shown below is what I arrived at. 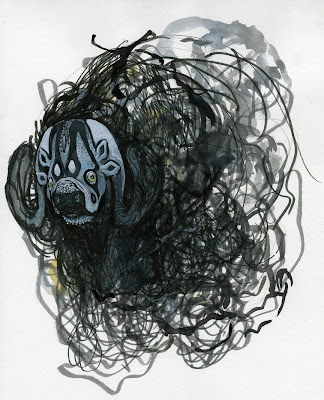 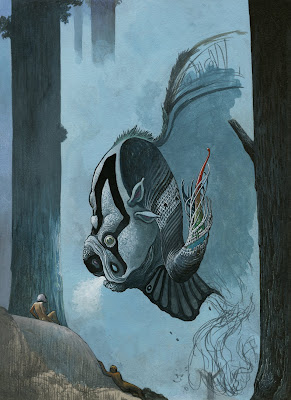